This is the text of a leaflet about balloon releases produced several years ago by the Marine Conservation Society and partners, and reprinted here with their kind permission. 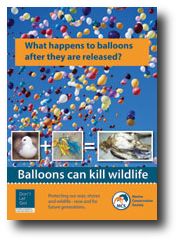 THE IMPRESSIVE VISUAL IMPACT OF THOUSANDS OF BALLOONS BEING RELEASED INTO THE SKY MAY LAST A FEW MINUTES, BUT THE IMPACT ON WILDLIFE AND THE MARINE CONSERVATION ENVIRONMENT MAY LAST MANY MONTHS WITH POTENTIALLY HARMFUL CONSEQUENCES

Many people are-unaware that balloon releases can result in littering and harm to wildlife. Once balloons are out of sight, they don't disappear - what goes up must come down! An estimated 90-95% of released balloons rise to an altitude of 5 miles where the temperature and pressure is such that they burst into small fragments. The remaining 5-10% that do not reach a high enough altitude may remain inflated and can float many miles before descending back to the land or the sea semi-inflated.

The largest ever balloon release was 1.4 million balloons, 10% of which - 140,000 - may have returned to the land and sea where they could have been mistaken for prey and eaten by animals.

Releasing balloons at large promotional and corporate events is not something that can be done without thinking about the consequences. Mass releases are potent symbols of our wasteful and 'throw away' society, whilst smaller releases and balloon races can result in a high percentage of balloons littering the land and sea.

Once balloons are released, they can become a serious form of marine pollution. A long list of marine creatures - dolphins, whales, turtles, fish, and seabirds - have been reported with balloons in their stomachs. It is believed that they mistake balloons and other buoyant plastics for their natural prey e.g. jellyfish and squid, and eat them.

The following species, all of which occur in the North East Atlantic waters off the UK, have been reported with latex balloons in the digestive systems:

It is very difficult to prove that ingestion of a balloon has been the direct cause of death of a beached animal. However, the fact that balloons have been identified in the stomachs of these animals indicates that the balloons are not rapidly broken down by an animal's digestive system and/or that death occurred shortly after ingestion of the balloon.

Whilst most balloons used in balloon releases are made of biodegradable latex, some are made of mylar foil which persists much longer in the marine environment. An infant sperm whale met its death in New Jersey in 1985 as a result of ingestion of an inflated mylar balloon which had lodged in its intestines. Consequently, the whale died of starvation.

A study on balloon persistence in the environment indicated that latex balloons degrade 'faster than an oak leaf' and this is often used in defence of mass balloon releases. However, an oak leaf in a cold water environment may take six months to break down and during this time the balloons can be carried hundreds of miles by sea breezes and ingested by marine life.

Attachments such as ribbons and string tied to balloons are a particular problem as they can lead to entanglement. A Code of Practice for mass balloon releases has been issued and states that ribbons must never be used, which will reduce the incidence of entanglement.

All seven species of marine turtle are near extinction and many turtles of two species in particular, the Loggerhead and Leatherback turtle, have been found with balloons in their guts, probably having mistaken them for jellyfish, their preferred prey.

A study to test whether turtles can digest latex balloons was carried out using pieces of balloon. These balloon pieces took up to four months to pass through the intestinal tract, often being passed in a mass.

This study has been used by organisers of balloon releases as proof that balloons have no detrimental effect on turtles, but no test was carried out to study the effect of ingesting whole balloons which are more likely to be mistaken for food and ingested.

Semi-inflated balloons can block the pyloric valve between the stomach and intestines so that food cannot pass through, causing slow, painful starvation.

Mass balloon releases are not the only problem. Small-scale releases and balloon races may have a disproportionate effect on the environment because:

The problems caused by mass balloon releases were first highlighted at a conference in Canada in 1989 on plastic and other debris found at sea. Balloons had been found accumulating on islands off the east coast of Canada; some were still partially inflated and their country of origin was traced to the USA.

Balloon releases immediately began to be cancelled in response to these findings, even the Canadian government decided to cancel the release of tens of thousands of balloons in Ottawa to mark Canada Day. This wave of anti-balloon sentiment has continued to spread across the whole of North America and many states in the US have now abandoned balloon releases.

Balloon Releases in the UK

It is the concern of the Marine Conservation Society that this message has not reached events organisers in the UK. The Marine Conservation Society / Reader's Digest annual Beachwatch beach clean and survey of coastal litter records hundreds of balloons in the UK, at an average rate of over 3 balloons recorded per km of coast surveyed. In the 1997 Beachwatch survey, 538 balloons were found on 169km of coast.

Since 1990 however, it has become questionable whether balloon releases are still within the law. Under the Environmental Protection Act 1990, it is an offence to drop "or otherwise deposit' lifter in a public place. During the debate on the Act, balloon releases and their potential for littering were discussed, but unfortunately, such events are not specifically noted in the EPA as being illegal.
The Marine Conservation Society, the Royal Society for the Prevention of Cruelty to Animals, the Tidy Britain Group and the National Farmers Union share the view that balloon releases should not occur in the UK given the evidence for the harm that they cause to wildlife and the aesthetic damage to the environment.

We recognise that balloon releases are often associated with charitable events and fund raising and are being considered for millennium celebrations. Whilst not wishing to prevent such events nor spoil peoples' fun, we are calling on all organisations to support a voluntary ban on balloon releases and to celebrate or commemorate events in more animal- and environment-friendly ways. It would be unfortunate if money were to be raised for one good cause only to find it is responsible for the blight of another.

What you can do:

The Marine Conservation Society the leading UK charity dedicated solely to protecting the marine environment, for wildlife and for future generations. We rely on funding from members to continue our vital work in preventing the pollution of our seas and beaches and protecting habitats and species Please support our work by sending a donation, or becoming a member.

Annual Beachwatch Report. A comprehensive report on the issue of marine and coastal litter in the UK. The report covers the results of the most recent annual MCS Beachwatch survey and covers the impacts on wildlife and people, legislation and recommendations for action to reduce marine lifter. £5.75 (incl. postage) from MCS.

A Study of the Effect of Balloon Releases on the Environment. 1989. By D K Burchette. Available from the National Association of Balloon Artists and Suppliers(NABAS), Katepwa House, Ashfield Park Avenue, Ross-On-Wye, HR9 5AX.