In brief: This page records our attempt to keep track of official UK river and water quality statistics over the last decade or so. It's also our ongoing attempt to debunk official press releases that suggest our rivers have never been better; that might be true of previously filthy "urban sewer" rivers, but broad-brush, aggregated assessments present a highly misleading picture overall. 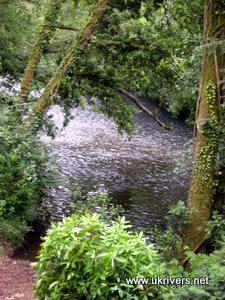 Over the last couple of decades, the British government's environment department (currently called Defra, but renamed every few years) and the Environment Agency have sometimes been a little disingenuous about inland and coastal water quality. Great progress has been made improving water quality and all credit to the people who've made this happen. But that doesn't mean rivers, beaches, and coastal waters are absolutely pristine, full of life, and always clean enough to swim, surf, or bathe in—and we shouldn't be giving that impression.

In September 2009, for example, the Environment Agency boldly announced: Quality of Rivers in England and Wales best for over a century. Elsewhere, the same day, the story was rather different: BBC News, for example, was telling us that Most rivers fail EU standards, while The Independent was asking Why are our rivers so dirty, and what can be done to make them cleaner?. Three views of exactly the same story! The explanation? European legislation had just raised the bar considerably and mediocre UK standards were no longer good enough.

That incident wasn't a one-off: government figures repeatedly paint a picture of ever-improving rivers and beaches while conservation organizations and environmental campaigners tell a different story. Here's another example. In November 1999, Surfers Against Sewage were telling us that UK Fails Bathing Water Standards Set 33 Years Ago, while the UK government preferred to spin exactly the same story as 98% of swimming spots meet water quality standards (where "water quality standards" is another way of saying "absolutely bare minimum mandatory standards").

The point is clear: you need to treat official statistics with caution and interpret them critically. To help you, we've been archiving stories and statistics about UK water quality on this page for over a decade.

). Most modern computers will load PDFs automatically in a new window, but if your computer doesn't you'll need to download Adobe Reader (formerly called Adobe Acrobat) or one of the numerous alternative PDF readers.

How clean or otherwise are Britain's rivers and inland waters? If you want the most up-to-date statistics for inland water quality in the UK, try the following pages: 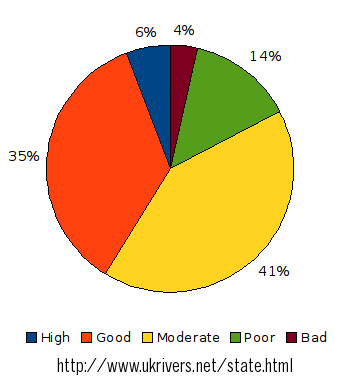 The key document to look at is EU: Water Framework Directive Implementation Report 2012. Once you're on this page, scroll down to where it says "Country specific assessments" and in the drop-down box, select "United Kingdom (UK) - SWD (2012) 379 Volume 29". This will download (in PDF format) a very detailed, 62-page report dated 14 November 2012 on the current status of the UK's implementation of the Water Framework Directive across all our river basin districts (RBD).

Chart: Right: How healthy are the UK's rivers? This chart shows the "Ecological status of natural surface water bodies" (including rivers) for the UK, October 2012. Source: WISE. Quoted in European Commission: Report from the Commission to the European Parliament and the Council on the Implementation of the Water Framework Directive (2000/60/EC): River Basin Management Plans, {COM (2012)/670 final}, dated 14 November 2012. As we said above, aggregated charts like this (which summarize the entire UK) aren't that helpful; it's important to study the detail for each river basin district and river. Nevertheless, it's blindingly obvious from this chart that a statement like "Quality of Rivers in England and Wales best for over a century" is unhelpful (at best) and disingenuous and deliberately misleading (at worst), because almost two thirds of the "surface water bodies" fall into the categories moderate, poor, or bad.

The report contains statistics and charts for each river basin in the UK, plus a summary (on page 4) of the current weaknesses ("gaps") in the UK's approach, notably: 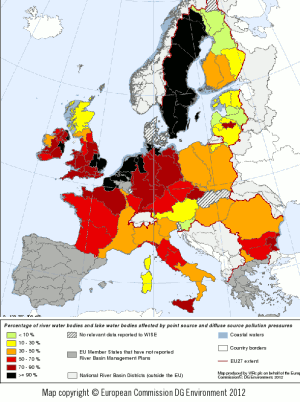 The chart on page 11 shows the number and percentage of inland waters affected by various different pressures and reveals that 68 percent are subject to pressure from diffuse pollution.

Section 6, starting on page 19, summarizes the state of UK inland waters by river basin, revealing the percentage that can be described as high quality, good, poor, etc. As you can see from the chart on page 29, virtually no "natural surface water bodies" are classed as "high" ecological quality, except in Scotland.

A list of recommendations for action for the UK begins on page 59. Agricultural pressure on rivers and inland waters is flagged up for specific attention: "Agriculture is indicated as exerting a significant pressure on the water resource in all UK RBDs [river basin districts]. This should be translated into a clear strategy that defines the basic/mandatory measures that all farmers should adhere to and the additional supplementary measures that can be financed." (page 61).

On pollution, specifically, check out: EU DG Environment: Point and diffuse source pollution: rivers and lakes (2012): This will take you to a full-sized version of the map shown on the right. Please note that this is a direct link to a large (8MB) PDF file, which will take considerable time to download on a slow (dialup or mobile/cellphone) connection. You can see from this map, which is dated 29 October 2012, that with the exception of the Scottish Highlands, the UK's rivers and lakes are almost entirely classed as 30–50% (orange), 50–70% (red), 70–90% (brown), or over 90% (black) pollution (where "pollution" means "affected by point source and diffuse source pollution pressures"). However you interpret this data, there's clearly no room for crowing about rivers that are better than they've been "for a century" or any other kind of complacency: England and Wales is almost entirely brown or black!

The Guardian's John Vidal has picked up this issue and written a couple of good pieces:

We haven't been able to find really detailed figures on river quality from Defra since 2007, when the way of measuring river quality was changed to reflect the new Water Framework Directive. The most up-to-date information is Defra's river quality statistics. Be warned: sweeping, national graphs give the impression that everything is just fine with our rivers and getting better and better by the day. It's our experience that graphs covering entire countries are a good way of masking problems in individual regions or with specific rivers, so treat them with the critical eye they deserve.

For a balanced view, read these unofficial news stories, reports, and related pages:

The figures for 2005 were published in this Defra news release

from 17 August 2006. It referred to the following charts, which showed broad (and generally very encouraging) trends for the whole country, but they also disguise a few other (worrying) trends in particular regions (notably Anglia).

We have also produced some of our own charts using DEFRA's data in e-Digest Statistics about: Inland Water Quality and Use.

We don't, unfortunately, have comparable charts for Scotland and Ireland. Scotland measures its river quality in a different way and has used three different systems since 1990, so the data isn't comparable. However, you can find the numbers in e-Digest Statistics about: Inland Water Quality and Use and plot your own chart if you wish.

updated the picture from 2003.

This 23 September 2003 news release from DEFRA

updated the picture from 1999.

The data in this section was compiled in 2001 using data to 1999. We have left it here for interest.

The UK's rivers are under increasing pressure:

Things are no better in Ireland:

The following statistics come from the useful little booklet The Environment in Your Pocket (January 2001), published by the then Department of Environment, Transport, and the Regions (DETR). They apply only to the UK. We don't currently have comparable data for Ireland.

For a detailed look at how water privatization policy led to a drastic degradation in the quality of the UK's rivers in the 1980s, look at The Dirty Man of Europe by Chris Rose, Simon and Schuster, 1990 and Coming Clean: The Politics of Water and the Environment by David Kinnersley, Penguin, 1994. Elizabeth Brubaker's presentation on Water and Wastewater Privatization in England and Wales: An Advocate's Perspective is a good summary covering similar ground.